EventsInternational Parliament for Tolerance and PeaceNews

Under the Patronage of HE Ilir Meta, the President of the Republic of Albania, in a global event, among a strong media presence, and on the International Day of Tolerance, the Global Council for Tolerance and Peace held the second session of the International Parliament for Tolerance and Peace in the main hall of the Albanian Parliament in the capital Tirana. The Speaker of the Albanian Parliament M. Gramoz Ruci, the President of the Maltese Parliament M. Angelo Farrugia, the Albanian Deputy Prime Minister Ms Senida Mesi, and a number of ambassadors, diplomatists, presidents and representative of regional, national and international institutions and parliaments from different countries of the world attended the opening of the session. Also, deputies members in the IPTP attended the session, representing 31 different countries from around the world.

HE the President of Albania inaugurated the session with his speech. He welcomed the participants to Tirana, reiterating the complete support of his country to the GCTP, which will contribute greatly in cultivating the approaches of moderation, openness and tolerance to fight racism, discrimination, extremism and non-acceptance of others.

HE the President praised the GCTP, its President HE Ahmed bin Mohamed Aljarwan, and its great accomplishments made since its launching in Malta in November 2017. He underlined that such a council with organs like these, such as the most important organ the IPTP, is considered an international window to express the highest humanitarian values, and to support the efforts of tolerance and peace around the world.
HE Ahmed bin Mohamed Aljarwa, President of the GCTP, addressed in his speech on this occasion, great gratitude and appreciation to the Republic of Albania, including its President, government and people, for hosting this historical session that was held on the International Day for Tolerance. He also praised the presence and the interest of the IPTP members, as well as their hard work demonstrated through their different committees, aimed at spreading tolerance and peace around the world. Aljarwan said that such great local and international interest in this session motivates us to always move forward towards our high goals and ambitions, to a more tolerant, safe and peaceful world. 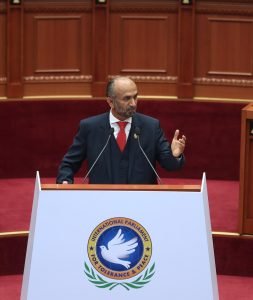 Aljarwan also noted: “Holding our session today symbolizes a practical translation of the celebration of the International Day for Tolerance. I see that our work in the GCTP with all its organs, and especially in the IPTP, reflects an execution of the international engagement made by our countries when they signed the charter of the United States.”
He added: “We may recall what was mentioned in the preamble of the charter of the UN concerning tolerance: “We the peoples of the united nations determined to save succeeding generations from the scourge of war… to reaffirm faith in fundamental human rights… to promote social progress… and for these ends, to practice tolerance and live together in peace with one another as good neighbors”. We may inspire from this preamble an explicit international recognition that tolerance is the only true way towards peace for our world, which motivates us to employ all efforts to support creative and distinctive ideas that contribute in spreading the values of tolerance in our societies…”
Aljarwan presented the most important subjects stipulated on the agendas of a council’s committees, expressing gratitude to the efforts of the IPTP’s committees on their work during the subsidiary meetings aimed at attaining initiatives, visions and ideas which the IPTP and the GCTP will work on implementing in a way that accomplishes the council’s goals in spreading values of tolerance and peace around the world.
From his part, M. Gramoz Ruci, the Speaker of the Albanian Parliament welcomed the participants under the dome of the Albanian Parliament, underlining the importance of this historical session of the IPTP and of its symbolism given that it was held on the International Day for Tolerance.
The Speaker of the Albanian Parliament praised the IPTP that reunited peace lovers of representatives of peoples from around the world in one place in order to discuss ways of promoting and spreading the values of tolerance everywhere. He also noted that noble goals like these deserve all support and pride.
M. Angelo Farrugia, the Speaker of Maltese Parliament said that his country is honored to host the headquarters of the GCTP. The dome of the Maltese Parliament also witnessed the first sessions of the IPTP last July. This symbolizes the deep faith of the Maltese government and people in the principles and goals of the GCTP. He also praised the efforts of the president of the GCTP HE M. Ahmed bin Mohamed Aljarwan, giving the credits of establishing such a great international platform to HE’s initiative and to the constituent council. And on the occasion of the second session in the Albanian capital Tirana, M. Farrugia invited the members of the IPTP to keep moving forward in the noble efforts and goals in order to spread values of tolerance and peace in the world.
HE Senida Mesi, Deputy Prime Minister of Albania said that the IPTP is to find radical solutions to the problems that the world is confronting today such as crises, conflicts, and disputes based on racist, sectarian and religious extremism. She expressed her gratitude to the GCTP and the international parliament for choosing Albania as the location of the second session of the parliament, reiterating that her country has always been a symbol of peaceful coexistence between different religions and beliefs.
M. Taulant Balla, an Albanian member of the international parliament and its current president, was the head of the second part of the general session of the council where the reports of the five committees – the committee for international relations, the committee for cultivating peace, the committee for legal affairs, the committee for women and youth, and the committee for sustainable development – were discussed, and were adopted. The IPTP also issued the “Tirana Declaration for Tolerance and Peace” which stipulated the following:
The IPTP confirmed that:
• Spreading the values of tolerance originated in different religions and cultures represents an essential engagement by the parliaments, and an engagement by different executive institutions of countries especially those educational, journalistic and cultural;
• Empowering women and youth to practice active roles in the lives of their communities is among the best tools of addressing different political, cultural and social matters faced by those communities;
• Spreading the values of tolerance in poor and marginalized communities will not work without serious work aimed at fighting poverty, disease, hunger, and without advancing in the educational level, considering them principal actions to establish equitable and comprehensive peace in these communities;
• Spreading peace among humans requires employing all efforts to ensure the respect of human rights in general, especially the right for justice and law enforcement, defending human dignity, attaining equality for all humans without any consideration of gender, religion, race, color or language or any other form of discrimination;
• Developing legal national systems concerning fighting discrimination, racism and sectarian and practices of violence in all forms, has become a necessity that we cannot ignore;
• Reinforcing the role of the media as a tool to attain international peace, especially the key role that international media can play in spreading the culture of tolerance among humans, requires developing a legal international system of the media to ensure the independence of the media, its neutrality and transparency.

The President of the GCTP, HE Ahmed bin Mohamed Aljarwan, received the key of Tirana, the first medal of the Republic of Albania, presented by M. Erion Veliaj, the Mayor of the Albanian capital, as a deep appreciation of his efforts in spreading values of tolerance and peace around the world, and his efforts through the presidency of the GCTP in promoting the good humanitarian values.

In G20 Interfaith Forum .. AlJarwan calls for peace-building rather than…

AlJarwan calls on to secure the dream of mankind to live in a new, peaceful and…